Some fly to neighbouring trees and continue the same raucous behaviour. They seem to be revelling in this rain. 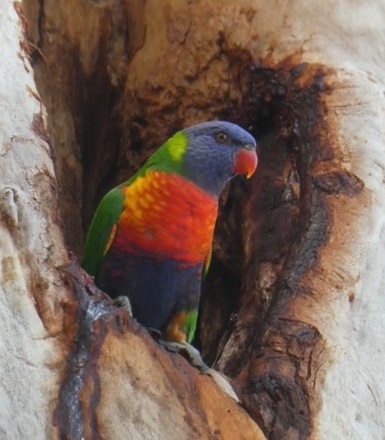 I’m not sure what was so special about the rain this morning. It rained a few days ago too and there was none of this ruckus. The screeching comes from several gum trees nearby and sounds like the shrill notes of rainbow lorikeets. I step outside for a better view and there they are: hanging upside down, spreading their wings, and shrieking to each other. Most are on the leaf-laden upper branches. Some fly to neighbouring trees and continue the same raucous behaviour. They seem to be revelling in this rain. A few years ago, I saw sulphur-crested cockatoos doing the same, but that was when it rained after a long dry spell.

I go in to get a pair of binoculars for a better look. When I come out again, there’s a king parrot on the deck taking shelter from the rain and staying clear of the noisy party in the tree canopy. I see one king parrot in a tree, quietly cleaning its feathers in the rain. Perhaps there is a grey butcherbird in there too and definitely some noisy miners, but I don’t hear their chatter.

After a while most of the rainbow lorikeets flew away, calling to each other as they depart - taking their excited noisy chatter with them - a few remain. In the tree closest to me I can see a pair side-by-side and another by itself on a mid-level branch. The lone lorikeet shakes water off itself. It preens its tail and then its body feathers. It looks soggy. Another pair of lorikeets fly-in and ousts the initial pair, who simply move to another branch close by. Perhaps the original pair were in a prime position since it is a big tree with few birds on it now. It’s much quieter now, I can hear the rain, but I miss the lorikeets noisy exuberance already.

Author bio: Kumudika is a keen watcher of urban birds and is well-known to bore her family with long-winded tales of interactions with the ones that visit their garden.